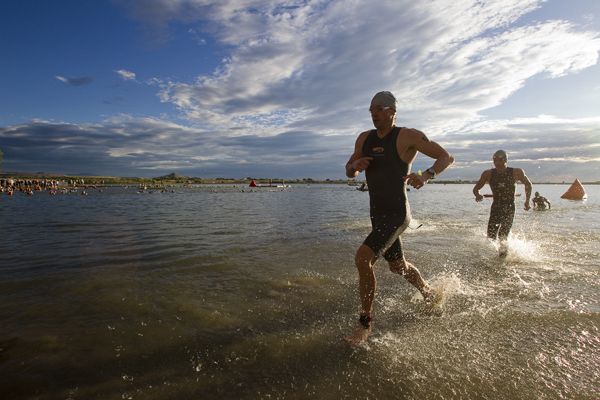 Tim DeBoom emerges from the water in the beautiful Boulder morning at the Ironman Boulder 70.3

On Becoming a “Certain Age”

Nothing is more disconcerting to an athlete than the sudden realization that we’ve reached a “Certain Age”. And it’s not gradual. One day it’s all about going faster and faster, the continual quest for personal bests. And then it’s not. It’s OMG! OMG! I‘ve become one of them.

For years we ignored it and frankly, it just didn’t interest us. When older friends of a Certain Age talked about it, we were like “Whatever…”

And we never like to admit we’ve reached a Certain Age. Certainly not to our fellow athletes. But once we’re there, we know it. Oh do we know it!

But we still like to think we can hang with everyone. And for a while we can. We just pay a bigger price. Recovery is now spelled “r-e-c-o-v-e-r-r-r-y”. We research all the science behind rest and how muscles recover. But why does it have to take so long? We know all the benefits. But it still pisses us off!

Sometimes a nerve just stops firing. Just stops. For no good reason. Other than it wants to retire and drink pina coladas by the pool. And the muscle it used to talk to? It stops working too. And we wonder why we have a certain pain. Once our team of therapists figures out the problem, we do exercises to get the scumbags back to work. And they fight us…every. step. of. the. way.

Gradually we readjust our goals. Before, we sort of tolerated injury and we healed fast enough. Now it’s a process in and of itself… with it’s own set of goals and ambitions. Getting to the start line relatively injury free is more satisfying than ever.

But even after we’ve reached that Certain Age, on occasion, we get to do a couple of things we’ve always liked to do. And they give us real joy, more so in their rarity. So when we’ve been good, and we’re feeling young and frisky, and all the conditions are right, the stars and planets are all aligned, for a few precious minutes….we get to run really fast!! As for the other thing… pretty much “ditto”.

And after a Certain Age, we develop new heroes. Like the 83 year old who was doing laps beside me when I was re-learning how to swim and going anaerobic in less than one lap. And wanting to quit. But she kicked my ego’s ass.

Or my mother’s friend who, in her eighties, still took to the streets on her rollerblades. And all the others who, even after that Certain Age, are still kicking and rocking it, pushing boundaries, refusing to go gently, and just doing it.

We remind ourselves “it’s all good”. Because it really is!!

A Call for Volunteers