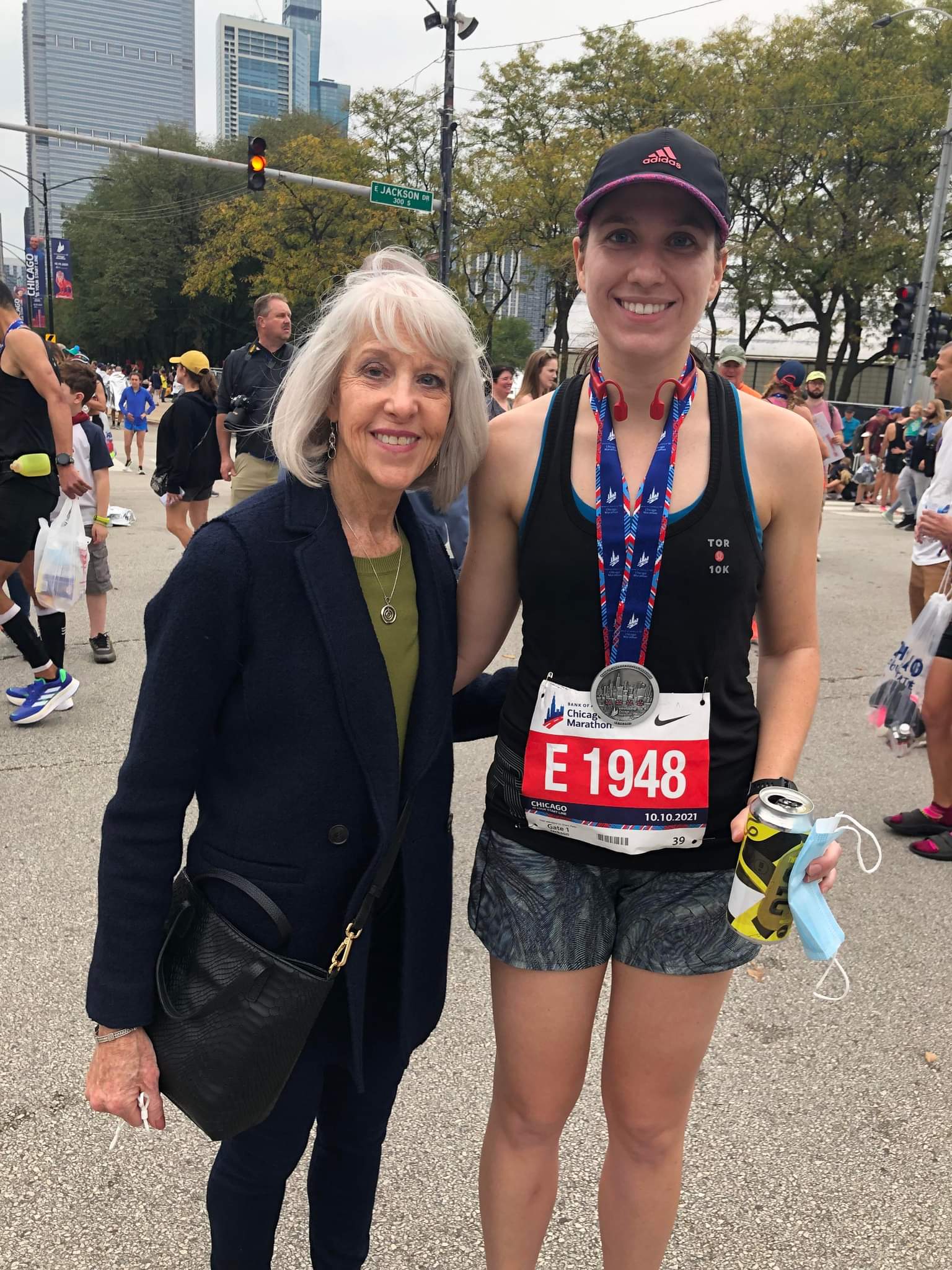 I ran the Chicago Marathon in early October. As a triathlete that skews heavily toward running, it is a goal of mine to run all of the World Majors, and Chicago was first on the list. I started applying through the lottery a few years ago, and found out I got into the 2021 race after applying in mid 2020. At that point, we were still early in the pandemic and at the point where we thought 2021 would be pandemic-free (ha!), so I signed up.

In June of this year, I started training. I love marathon training and always enjoy incorporating new speed workouts and building up my long runs. I try to use long runs to explore new parts of my city. I discovered some new streets & trails during this training cycle, like the Escarpment Rail Trail in Hamilton. The summer months were a fairly busy season for me work-wise, so my training became my main free time and I (usually) looked forward to it. I loosely followed a training plan, completed *most* of the key workouts/long runs, and stayed injury-free, so I was happy with how training went overall.

As training progressed, so did the pandemic. I knew that despite being signed up for the race, I wouldn’t go if the risk was too high. I monitored cases both in Ontario and in the Chicago area in the months leading up to the race. Thankfully, cases were decreasing in both areas. I found out I could travel there and back on planes that required both a vaccine card and a negative test, which made me feel a lot better. Three weeks out, I fully committed to the race. Yay!

Race weekend arrived, and I got to Chicago on the Friday before the race. Chicago is a beautiful city with incredible architecture. Some of my family from the US came to the race as well, which made it extra special for me. I had never travelled for a race before, so planning meals that were good race fuel was a challenge. I made some classic pre-marathon mistakes—not keeping hydrated well, having some new-to-me foods, and walking 25k steps the day before—oh well. Once race morning arrived, I felt excited and ready.

I had run big races before, but Chicago was another level—there were so many people! Thankfully, everything pre-race was outside in Grant Park nearby the start. I nervous about being the only one wearing a mask before the race, but most others were wearing them. I was also nervous about the “fall heat wave” that suddenly hit Chicago that weekend. It was 22 degrees C at the race start—not ideal for marathon running.  Although I had a goal time in mind, I tried to make myself keep it flexible given the heat. By 7:50am, I crossed the start line.

The race route was mostly flat and went through 29+ of Chicago’s neighbourhoods. The first half of the race, I felt great. I didn’t turn on my headphones at all and was never bored as the full 42.2k was lined with spectators with signs, music, costumes, etc. It was so lovely to be in a race environment again. Up until 25k, I enjoyed the city sights, kept within range of my goal pace, my legs felt good. I kept up with nutrition & hydration too, which I typically struggle with during races, so that was a win for me.

Things changed after 27k! It got up to 25 degrees and was difficult to keep cool. Race volunteers began handing out cold sponges and some fire hydrants were opened to spraying cool mists for the runners. I felt like I couldn’t keep control of my heart rate or stay hydrated as well. By 30k, I remember thinking “I think I’m done with marathons”. 🙂

The last 12k were a little tough. I always aim to run negative splits in my races, but that was no longer happening. After 32k, I walked through a few aid stations to ensure I drank the full cup of water each time. It was definitely demotivating to see my pace per km drop in the last 5-7k. Once we were back into the downtown core and had 2-3k to go, I focused on getting to the finish line ASAP and enjoying the last bit of this incredible race. At 41.8k, basically the only hill of the race appeared, which was probably 500m and 2% grade, but felt like 7k at 7% grade at the time.

I made it to the finish in 3:42. I was a little disappointed for not meeting my goal time, but felt great to be done and to have run a two-minute PB as well. I grabbed water, bananas, a medal, and a bag of ice and hobbled over to a curb to sit and contemplate life for a while. Many cramps ensued. After spending several minutes attempting to stand back up, I met up with my family and went back to the hotel for a warm shower and all the Gatorade.

In the hours after the race, I was still in the “I think I’m done with marathons” mindset and waited for my stomach to settle. By early evening, I felt much better and went out for what been waiting for all weekend—deep-dish style pizza. By that night, I was researching the NYC marathon lottery. 🙂

The next morning, I was sore but felt good relative to how I’ve felt after past races. I wish I could have stayed longer to see more of the city but hopped back on a plane home early Monday. I feel very lucky to have been able to run the Chicago Marathon at all, let alone in a pandemic year. It’s definitely my favourite race I’ve ever run, and I hope to be back one day.

Muskoka 70.3 Race Report: The best of times …. The worst of times