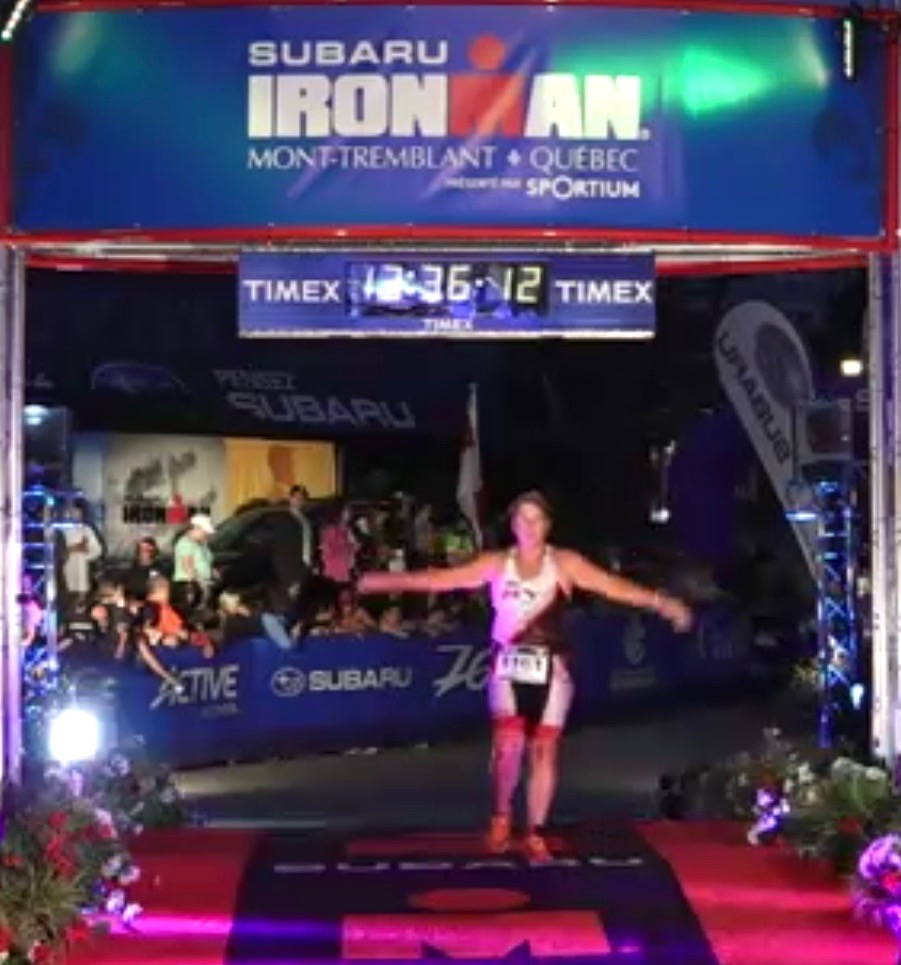 Do I Have to do it?  Ironman Mont Tremblant

Caught up with the exuberance I signed up for IM Mont Tremblant. After less than a stellar and somewhat limited season of training, I was extremely reluctant to do the race. I tried everything to abort it (boob injury- thanks Kelly) and join some of my fellow non-racers (Gail, Roger and Shawna- sorry) but Greg said ‘no’. Found myself at another start line. Last wave of the swim, if you want a tough start try joining the 40+ women- goggles dislodged within 100 meters, soon after nose kicked, checked to see if it was bleeding– t’was not. Passed some athletes in each of the swim waves, many breast strokers and some back strokers– and you think front crawl is hard. Tough swim, the winning woman pro described it as the waviest swim she had ever done in a race. Happy to reach land (1:19) and run to transition. Then off to the bike in heavy rain—no worries I have this, practiced last year at IM UK. Rained continued throughout the bike, many many crashes—ambulances and athletes down at the side of the road and Greg’s persistent ‘slow down’ (yes he can’t stop coaching even while racing). Was very tough but no crash (which is somewhat novel for me) finished (6:35).  At transition a volunteer asked for my bike – somewhat dazed (last two in Europe were a do it your self affair). Off to the run—well to tell the truth, a walk—legs were broken, perhaps I had left everything on the bike—after a stern bit of self talk—‘you are a machine’ running, running, running forever (5:01). Down the shoot to an incredible celebratory finish line. 13:11 slowest IM time, tough but not toughest—see IMUK.  Notable things about the season and the race—a good start with my UCTC group in Calgary—maybe next year I will attend more practices– thanks coach Mark and team mates. TCOB including the most amazing group of powerful and generous women training partners – you are so inspiring and courageous (Margaret, Helene, Kelly, Katherine, Shawna, Wendy, Francesca). I aspire to be more and more like you.  Wonderful to see so many of you on the course during the race. Your courage under duress kept me going. Great to share the journey with my seasoned Runners Den mentors the Pauls, Gord and Ester and their son Dan on his inaugural IM.  Thanks Eric for bike transport. I am thankful for the best support and cheering crew ever Pat, Mary, Roger, Michelle, and Robin and so many other TCOB and Pace Performers, you kept me going throughout the long long day.  Thanks also to all my friends supporting from a distance. IMMT is the best race I have ever done (great venue, fabulous volunteers, fireworks, music, and more–poutine pretty good too!). Grateful to Greg Pace for always knowing the right thing to say.  And as my friend Gail said, ‘Heck of a way to do a sim for the sprint race at the ITU’s in Cozumel’.

See you on the next start line, my friends.