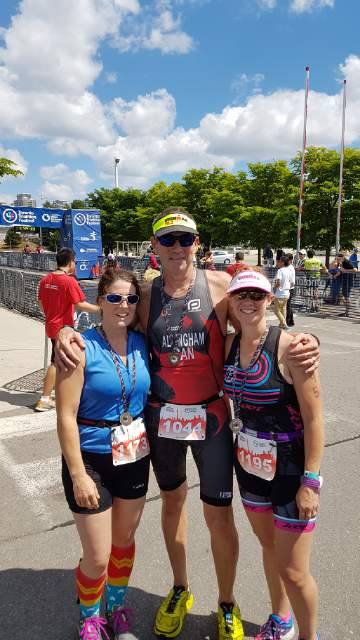 This was not only a fun race to do with the cycling leg on the closed Gardiner Expressway, but it was the first one I have done with both my daughters Tara and Kerri in the same race.  And I ran across the finish line with both of them together.  Absolutely thrilling and gratifying for and old Papa.

It was a very nice warm day but with clouds rolling in and out it really couldn’t have been better.  Swim water temp at Ontario Place was quite cool but not a problem and my girls had good times even though we were all in different waves.  The bike leg is always fun riding on the Gardiner with no cars.  It was a bit breezy but with the wind behind us coming back the times were all good as well.  The run is always my poorest leg but got it done and so did the girls.  Since my wave was 8 minutes ahead of Kerri and 12 minutes ahead of Kerri I go to see them both on the bike out and back and same for the run.
And then I waited for each to finish and ran across the finish line with Tara first and then both of us joined Kerri.  I asked Tara just before her finish if she wanted to beat me so she sprinted the last 15 yards and it turned out she beat my overall time by 1 second as a result – bummer or maybe not. And then we all waited for our good friend Mary Loeser to finish.
Truly a great day the day after my birthday – what a gift.
In the end I placed second in my age group to a “younger” 70 year old but beat the other old guy who had beaten me in the inaugural Toronto race 5 years ago.
But this race wasn’t about me – it was all about family and we celebrated with a bbq afterwards wearing our Team Allingham T-shirts one of which will go into the Allingham Hall of Fame.
Next stop on this tour is doing the Mont Tremblant Sprint next year with my son Mark who says he is up for it.  And he can use my extra wet suit and one of my bikes if he doesn’t get his own by then.  That will complete this family thing until my grandkids are old enough for me to race with them.
Happy happy day.
Paul
Ottawa Race report

I did the Sprint.  This was the first draft legal cycling sprint race after years of no drafting and was a big change this year.  I think it kept the participation down from past years. My daughter Tara did the race also as we both wanted to qualify for the Rotterdam world championships next year.

Weather had been very hot and humid leading up to the race but it was cooler and a 6:30 start was virtually perfect with little wind.  Water temp was 25C so not wet suit legal.  Bit of a dirty/murky swim in Dows Lake on the Rideau Canal but not a big problem for an old guy immune to mostly everything.
Bike was along the Rideau Canal on closed roads.  The draft legal aspect didn’t help too much as I was in the last wave and most were on the course by the time I left transition. But one other guy was about my pace so we hooked up and alternated leading every 60-90 seconds.  It helped with our speed and I was pretty fast but mostly it helped my legs to not get tired as the recovery when I was 2cd in out 2 man line was more than expected.  As a result my run leg was one of my best in the last 2 years.
All in not a bad race and I finished 2cd in my age group – and qualified for Rotterdam.  Tara finished 10th in her group and tentatively qualified but will await the adjusted results to see if any 44 yr old who will be 45 next year will bump her into the September qualifying group when they open it up to Additional team Canada members.  I’m pretty sure she will be in.
Next year could be another milestone if we compete together in the World Championships.  Doesn’t matter how we finish there as long as we do and wouldn’t it be neat if the wave start timing allowed us to finish together.
Sorry no photos as our supporters were to busy cheering and photographing 2 of my grandkids Natalie and Adam competing in the Kids of Steel races.  Now if only they could compete at the Worlds with us.
Cheers to all,
Proud Paul