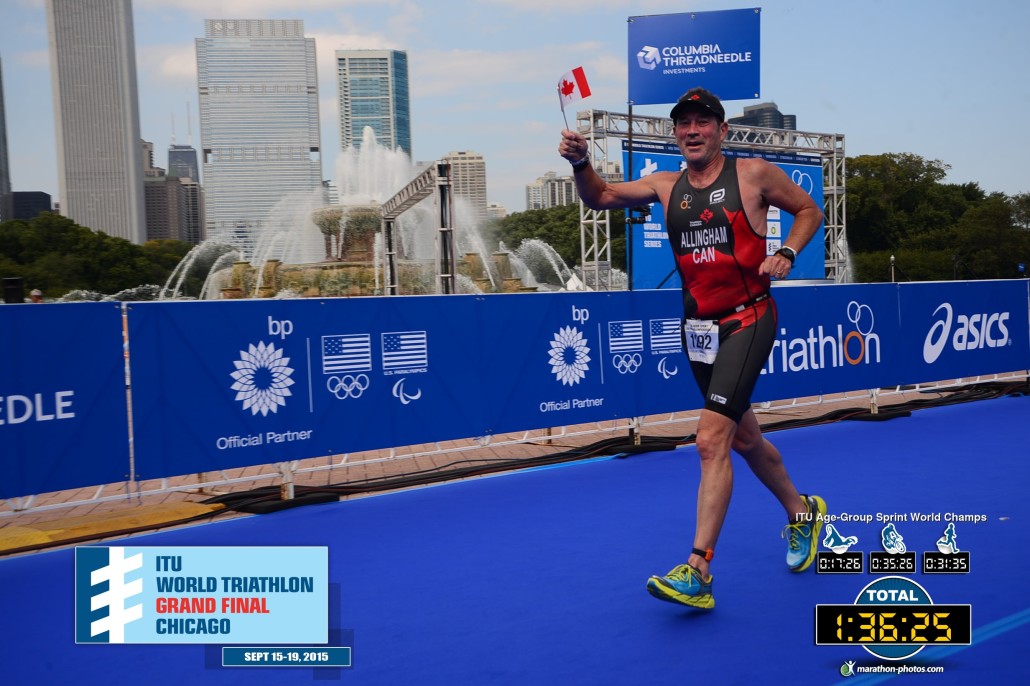 We did good.  Race morning was pleasant with temps in the 70’s that rose to low 80’s by the afternoon but only a little wind.
Race start at 11:30 was OK but water temps a bit cool at 63F (16C).  No problem for hearty Canadians.  About 93 in our wave but that was all men in any age group over 70 years old (70-74, 75-79, 80-84, 85-89 and 90+ apparently but I didn’t see anyone in our wave in a wheelchair).  No cuties to watch as they went later.
Turns out the swim was against a bit of a current which was created by the winds from the south and we swam head on into it.  And the course that was to be 750m was measured by some athletes with GPS at 830m so the times were a bit slow.  My time was 16:31 about 10 seconds ahead of my buddy Derek but we were together racked side by side in transition.  He got to the run before me as I decided to put on socks and he didn’t.  It was a long run into and out of transition so our T time was about 6 minutes.  The course was 1 1/2 laps up and down Columbus Ave dead flat.  I followed Derek most of the way and a hundred cuties passed us as the younger faster ones were in the waves behind us.  Couldn’t catch one but I caught Derek.
My 5K time was my fastest of the year at 27:48 about 5 seconds faster than Derek but we crossed the finish line together at 50:32 total.  And we were told we were 5th and 6th in the 70-74 group (in the world?).  Not bad for a couple of old farts.
Sprint Race Report

Another race but hotter today and more humid than yesterday and more winds.  They raised the red alert part way through the race as it got hotter and very humid and the forecast cloud cover didn’t materialize.  An Aussie stumbled and fell 3 times in front of me near the finish chute looking badly dehydrated.

Winds from the south still created a bit more current to swim against so my time for the 750m (some said it was 830m on their GPS although they may have wandered off course) was slower at 17:26.  Slow transition again because of the long run in at over 6 min. but a pretty fast bike over the 20K in 35:26.  My new Cervelo P3 is pretty quick on this flat course and handled the wind fine – I was doing 35-37 K/hr with the wind and holding 30 K against it.  Averaged around 32 I think with a couple of hairpin turns slowing things for a bit.
A 5 minute T2 again with a long run in with the bike and then off on the run for 5K but it was blistering hot and humid and I managed 31:35 which was a few minutes slower for that portion than yesterday.  Nevertheless I placed 13th in the world for 70-74 guys and top Canadian.  I’m happy.  The spectators were great especially the Canadians cheering.
Derek finished 15th and 2cd Canadian in the age group about 1:22 behind me and other than my quick bike time may have beaten me as he was  30 seconds faster on the run. We were within 4 seconds of each other on the swim part
Not so sure about the Olympic (Standard) distance race on Saturday as the weather is forecast to turn with thundershowers and high winds tomorrow and early Saturday. Cooler weather will be fine but rain and higher winds will slow things down especially on the bike.
Attached a couple of photos from yesterday before the opening ceremony where Derek and I were clowning around a bit.  There were a number of photographers on the course today and I should see the results tomorrow so I’ll forward some of the decent ones when I get them.
Cheers, Paul
Olympic Race Report

Well our final race is over and I’m home.  We left right after the race and drove the 8 hours arriving at 2 am.  But it was worth it to sleep in my own bed and have the entire Sunday to relax with NFL football and the BMW Golf Championship and the Jays game.  A bit tired and some minor stiffness after 3 races in 4 days but really fine.
In the build up to the Saturday race on Friday the weather forecast was quite poor with a big storm expected by 4 pm so the race organizers made changes and they were the right ones. The women’s Elite pro race scheduled to 5 pm was moved up to 1 pm.  And our bike check-in that afternoon was cancelled.  The storm did hit at about 4 pm and lasted most of the night with heavy rain.  High winds also resulted in the cancellation of the use of solid disk wheels and left many athletes scrambling for replacements.
So our check-in and set up was for 6 am Saturday and by then the storm had essentially passed leaving a lot of flooding in the suburbs but downtown for racing turned out to be fine.
The water was calmer but a bit colder at 60F than earlier in the week.  And the winds had changed to come from the north which created a current that we swam with for 1150 of the 1500m rather than against.  Because of the storm there were a lot of floating weeds to swim through and you couldn’t see much as it was murky but it wasn’t a big problem.  So my time was decent at 31:39 about 40 seconds behind my buddy  Derek.
My bike was good and 40K done in 1 hr 12 min is faster than my usual despite having rather tired legs – the new tri-bike is great in the flats.  The course was flat and that helped as I was in the aero position most of the time.  But it was quite technical with lots of turns both right angle and hairpin as 1/3 of the course was in tunnels or under the downtown Chicago streets.  It was hard to see with dark sunglasses at times and I saw several crashes, a couple right in front of me, when racers didn’t slow enough for the turns.  Because of the “tunnels” my GPS only registered 24K of the 40K as it couldn’t get a signal.  That put my average speed at 20K/hr but it was really over 32K/hr when adjusted to the proper distance covered.  Not bad with all the turns and the winds when we were above ground.
I picked up 3 1/2 minutes on Derek but he caught me again half way through the 10K run.  My GPS showed it was actually 10.5K and we heard from our coach after that the layout had been long.  So my time of 1 hr 9 minutes was misleading. It was a tough run as it got hot again and my legs were tired and had no lift.
Nevertheless I finished the race in 3 hr 5 minutes and was 16th, about 90 seconds behind Derek who was 14th.  When you totalled the times for our 3 races we ended up within 3 seconds of each other over 5 1/2 hours of racing 3 times in 4 days.  I guess when you are over 70 everything goes at one pace regardless – “fools seldom differ”.
It was the end to a very nice week.  There were hiccups by the race organizers and Triathlon Canada along the way but it all ended on a good note with a very successful event.
I read a nice article on Don Henley of the Eagles while in Chicago and to quote him “the great becomes the enemy of the good”. That’s how I feel right now – good and just happy to finish and be here or anywhere.  I could say great but I don’t want enemies.
Cheers, Paul

Race Prep for Your First Triathlon

TCoB “Get Geared Up” Educational Evening at Neworld March 31st