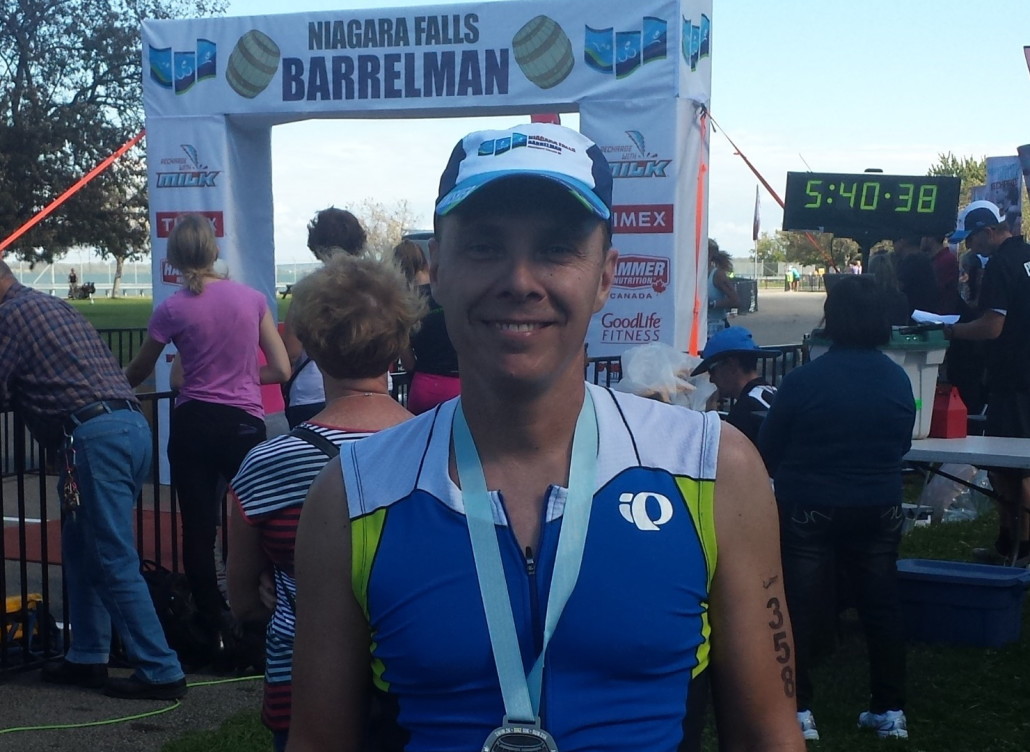 Well I did my first half iron distance this weekend but it was no small test for me.

Let’s take a step back.  As a youngster, I raced multi-day bike races and multi-day MTB races.  Did road and off-road triathlons for fun without much training. In 2010, on a bet, I started running again.  While I always enjoyed running, the first outings were very painful and let’s just say hard on the ‘heart and lung system’. Of course I could bike and play hockey and keep up with 3 kids and work 60+ hours a week but could I run a 5k again under 23 minutes… It happened within 2 weeks and I have not stopped since – that summer I ran 3 ‘5-K races’ and did 2 ‘try-a tri’.

So 4 years later (May – June 2014) when I started planning my season, I was unsure if I was going to finally put my ‘big boy pants’ and sign up for a half iron distance race.  Yes I booked a hotel for Muskoka 2 years in a row and never signed up for the race… SO I challenged myself and signed up for 3 Xterras and a number of sprints for the summer – you have to understand that I hate swimming in a lake so the Olympic distance never entered in the picture.  Following JD, Piers, Kim, and other members of the TCoB doing the half distance motivated me.  After having a chat with my wife (who is the voice of reason and knows me too well) and team members, I agreed to meet with Ana and sign up for the ‘Barrelman Half-Iron Distance’.  Now – remember – I hate swimming in a lake – I had 12 weeks and had to get going on swimming OWS.  I also had to cancel my beloved Xterra racing schedule.  With dedication / motivation to finish one, I embarked in a very organized training program developed by Ana. I realized I was training but not really training.

So the calls / emails started – who is going swimming outdoors.  Thanks to JD, Tanya, Patti, Piers, Kim, and Olivia who showed up for their swims but also to motivate me to keep it going.  First outing at Gulliver – I did the raft swim (4-3-2-1) in 27 minutes non-stop about 1.6k. So I said it is not that bad… As the weeks went by, always with my buddies, I started swimming 2 loops under 40, 38, 36, and then 34 minutes non-stop.  Hey I am onto something – if I don’t lollygag and focus, I can do this 1.9k swim.  Then the longer workout started – love the long rides but the long runs… not so much.  I saw tremendous improvements in my running form and tolerance / speed etc. as I increased the mileage. Started to play with nutrition – hey I am doing pretty good so I think I am ready.

As race day approached, I started to worry about if I am really cut for this type of endurance sport.  So I tapered and followed the program to a T for 12 weeks.  Got organized the day before / morning of race and drove to Welland to register and rack the bike.  Then I drove to Niagara Falls T2 in Chippewa along the Niagara Parkway and attended a pre-race meeting.  Then I learned that we would swim counter-clock wise in the canal (so right to left for those who have done Welland Half in the past) – over half of it against the ‘current’ and biked 92.5k because of construction. The wind on the Saturday was also unbelievable and we all hoped it would calm down…

Slept poorly at the 4-point Sheraton Saturday night, got the race gear sorted out and picked up Mike at the parking lot in Niagara Falls.  Got to Welland to prepare in the heavy rain but no thunderstorm yet.  Weather calmed down and it was off to the races… got the transition bags sorted out and BAM it was here. I had a goal – be a finisher and hopefully under 5:30.

New wetsuit and 100+ people in my wave, I was ready for this.  Down the river for 300m with a hit in the face / split lip but I kept on.  Got grabbed a few times and one guy even pulled me under as I was drafting for a bit.  Got a (R) calf cramp from kicking hard to get away from him then made a wrong turn. Instead of cutting in at the last buoy, I crossed the canal – so swam an extra 175m I think… Came out of the water in just over 35 minutes 11 out of 51 in AG… so take away the 175m extra, I was on fire and ‘killed the swim’.

T1 was slow as we had bags to empty / refill and get the HR down before I embarked in the 92.5k ride with gust of up to 60k at times. Bike went well, passed numerous people from wave 1 and some in my AG.  The first 30k were hard as the wind was relentless.  Drank a little every so often and ate some of the things I used in training every 30 minutes or so.  Then at 65k I hit the wall, time for a caffeine gel… hey tasted funny.  Finished one bottle from bottle exchange – HEED – still had a bottle of water from the exchange in my saddle carrier – but I forgot all about it.  Ride picked up as hovering around 40-45kph with a nice tail / side wind.  Then the Parkway arrived – more wind and something funny happening inside my stomach and my left shoe / pedal felt funny… T2 arrives 2:39 – saw my crew – happy that I survived and ‘killed the bike’ – good dismount… and search and rescue for bag 358… 8 out of 51 off the bike!

The run started very well and I kept faith that I would finish.  Still no sign of Mike and Allan who started 5 minutes after me but who are machines on both the bike and the run. Saw JD and Meghan (his daughter) at about 5-6k and was encouraged by being told that I was in the lead pack – meaning the AG pack.  So more smiles on my face.  Then it all started to fall apart – 6K had to walk, got caught by an AG at 7k (it was about time as he is Mr. Canada according to a conversation I had with him last year at a race …).  Then Mike caught me at 8k – asked me if I needed anything from his ‘Pharmacy on Wheels’.  At that point I was running 5 and walking 1.  I felt horrible, I was having cold sweats, my stomach was acting up and my mental health was not where it usually is… Back to T2 for the second loop saw some TCoB / Pace racers starting their first loop and that motivated me a little – also seeing my crew at T1 gave me a ‘little’ boost as by then I was ready to quit.  Then I remembered, they have ‘COKE’, so I started ‘doing COKE’ every aid station.  Paced picked up but by then I knew 5:15 to 5:30 was in jeopardy. I did not care, I just wanted to finish, saw Allen at 13k and was waiting for him to catch me quickly but he only showed up at almost 15k – what took him so long… I think he walked Burning Spring hill (but don’t say anything).  By then I am feeling ‘Hey I am not doing too badly now’… another false illusion.  More hills, more COKE, and less motivation to keep going. As the Ks went by I realized I was at 19k, no more stations…

So I finally arrived at the finish line at 5:31.26 – 23 out of 51 after run; 15 out of 51 in AG (102 out of 488).  I was happy to have finished but also had mixed emotions. I was laughing, I was crying, I wanted ice, water, food, chocolate milk, sit down / stand up / stretch… Holy cow – slow down Charlie… I promised myself that I would do a Half Iron distance race and I did it.  Happy with how I handled the training, family life, busy private practice, 3 kids with busy schedule, and having enough time and energy to spend time with Karen.  But the question remains – AM I PHYSICALLY SUITED FOR THIS DISTANCE?

I admire all of you HIM and IM racers and I still cannot understand how you can do more than one a year… Thank you to my wife Karen for supporting me during the last 3.5 months for that aspect of my life. I would also like to thank Ana, JD, Patti, Tanya, Piers, Kim, and Olivia (not in any preferred order) for helping me during the last 3.5 months and Margaret for asking me to write a little (long) something.  Thanks for the thumbs up and good vibes on Facebook.

One thing I know for sure – you are never prepared for the unexpected during a race or in life in general.  Now it is up to me to decide if I am prepared for next year’s challenges and what I will challenge myself with… Who knows what JT will do in 2015? One thing for sure is that ‘while I trained smart and controlled only what I could control, “the run killed me”’.