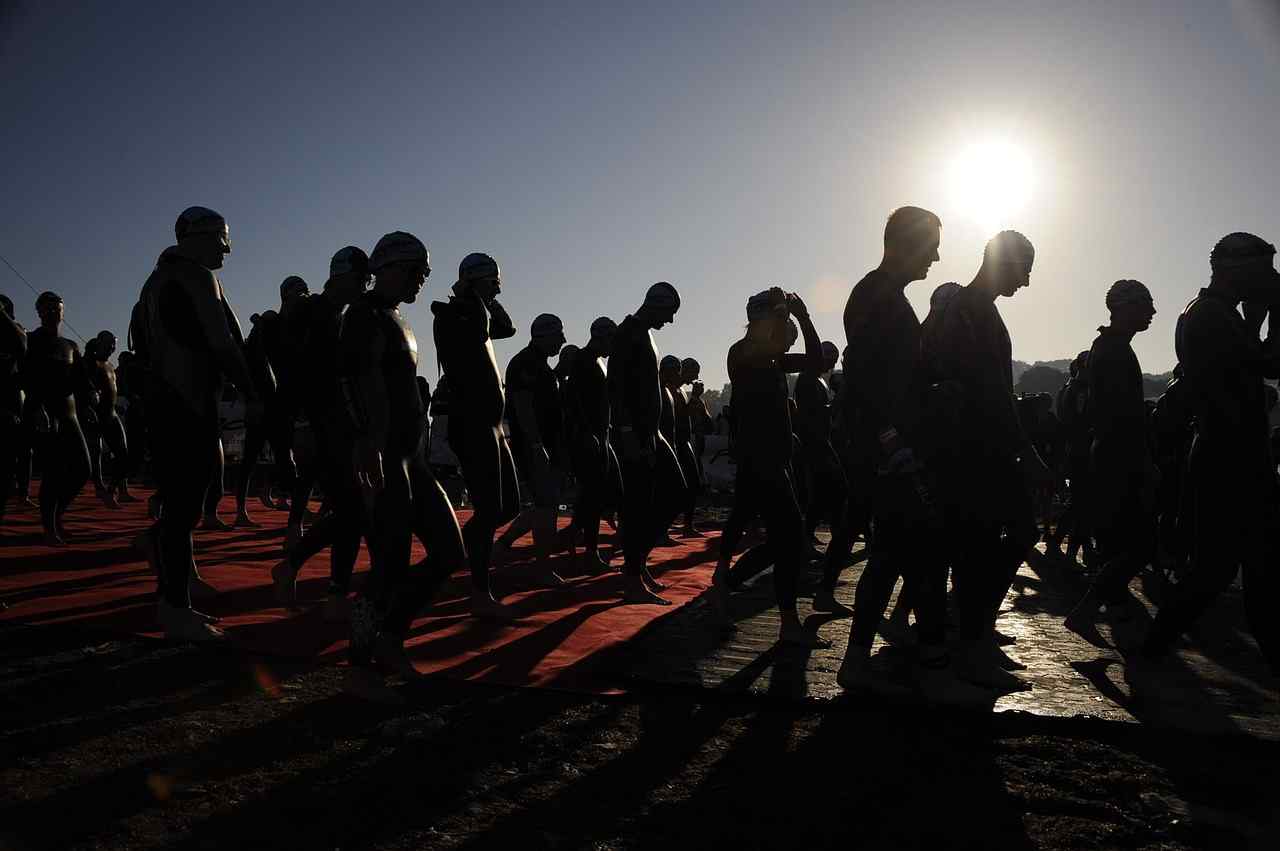 Before even completing my first IronMan in Penticton in 2008, I was hooked on the idea that maybe, someday, I would make it to Kona.  After missing out by one spot at both IM Canada 2008 and 2010, I finally qualified at Wisconsin in 2012.  I had a year and a bit for the reality to set in and the training to ramp up before heading out to the Big Island of Hawaii for what was to be the best, happiest, and most memorable race of my life.

Right away, I would like to acknowledge that, like Diana Nyad said after her historic long distance swim, “It looks like an individual sport, but it takes a team”.  For my Kona IronMan, I had the best team ever.  Thanks to the coaching of Greg Pace I was prepared both physically and mentally for this tough course.  Many thanks to my family.  Without their support thru the whole year of training, and especially on race day, I would have not have had the desire to keep going.   My main motivation during races is always to get to the finish line so I can see Mario again – the hug he gives me at the end of a race is more replenishing than any amount of water, food or rest.  I was very fortunate to have my Mom and sister with me for this trip.  In the days leading up to the race they cleaned and cooked, so that all I had to do was focus on getting ready.  Seeing them on the race course was another oasis of joy during that amazing day.  All of the e-mails, letters, and Facebook messages of encouragement that came from my kids, my brother Joseph, other family members, friends, and the many wonderful TCoB members  did an amazing job of boosting my confidence.  I felt strong and ready and couldn’t wait to get the show on the road.

Heading down to the pier race morning was magical.  Dim light from the few street lights illuminated the road, on which I saw the messages from Greg and Robin:  “Good Luck IronMan Margaret.  This is Your Day” and “#667 We love you Margaret, YOU OWN THIS”.

I didn’t want that chalk to ever wash off.

After getting my tattoo body marking and my bike ready, I donned my red skin suit and headed down to the little beach with the 2,120 other athletes.  I saw Mario just before I got onto the beach, and snuck thru the volunteers to give him one more kiss before the start.  So many emotions and tears threatened to break thru, but as Greg advised me before my first IronMan, “Hold it together, and channel this energy for the race”.

The swim was pure fun and entertainment.  Clear, warm water with views to the bottom of the ocean almost the whole way.  Watching fish, and feeling the soft salt water bubbles off the other swimmer’s feet was awesome.  I had a great line along the buoys and drafted off of people the entire way.  I was actually surprised at how quickly the end of the swim came.  It was the only leg of the race that I completed faster than I had anticipated.  Thanks to Beth Primrose for the swim coaching all winter – it really did pay off!  I climbed out of the water and into the fresh water showers, and to my surprise many cameras saying, “there he is”.  I turned around and saw Super Bowl champion, and Dancing with the Stars winner, Hines Ward beside me.  So yes, I can say I have showered with a famous football player.

I took my time in T1, as I wanted to make sure I was prepared for the hot windy ride.  I only wish I had done a better job with the sunscreen on my shoulder blades.  I ended up with quiet a bad sunburn, which went unnoticed until after the race.  I was so glad to see (and definitely hear) Robin cheering as I started out on the bike.

I must thank ‘Madame Pele’ for what was reported to be a lack of wind and heat on race day.  Having talked to many people who had done this race in the past, the winds were very quiet this year – but I thought differently.  I was able to stay upright on my bike, but the head wind for the last 60km was incredible.  The heat on the bike was bad too, but I kept dowsing myself (and my white arm coolers) with water every chance I could.

I took it a little easy thru town, and then I came upon Hines Ward again just before Havi.  Once more, I heard someone saying “he’s coming”, and saw lots of motor cycles and cameras.  They would drive up ahead, park and then wait for him to pass by.  Sometimes, they would drive along side of him with a camera in his face as the poor guy tried to just ride the course.  So, Hines and I road this way for almost the whole bike leg.  I would pass him, and then he would pass me.  Finally I thought I would pass him for the last time, but somehow, he ended up ahead of me coming out of T2 onto the run – sneaky wide receiver that he is 🙂  I have a lot of respect for this athlete.  He cycled with two knee braces on, and never drafted behind his motorcade.

The run is usually my least favorite of the three disciplines in triathlon, but this run was definitely the most fun leg of this IronMan.  I passed good old Hines around the 2km mark in the run and saw him briefly at some of the turn arounds.  So to my youngest son Jake, who is a huge football fan, I can say that football players make great endurance athletes with the right training.  If you have the discipline and drive, anything is possible.

I saw Robin and Greg at this point in the run as well and they captured some great photos.  The supporters thru out the town, the music, and the knowledge that I was doing something that I loved and had dreamed about for so long made this section of the race wonderful.  A little further down the road, I saw Mario, my Mom and Carol outside outr condo and gave them all a big sweaty hug and kiss.  All of them had their IronMarg t-shirts on which made my heart burst with love and joy.  After the turn around in town, I knew I would see them all again before heading up to the Queen K highway.  Once on this highway things got a little quieter and I was left to the thoughts in my head.  One thought that came up was the fact that I had about 21km left to go and I actually felt a little sad.  Like a kid on Christmas morning, coming to the end of opening her presents, I knew that after a little more than 2 hours (or maybe more) this day would be over.  I didn’t want it to end.  I was feeling pain and fatigue, but this is the feeling of accomplishment, of hard work and achievement and I was loving it.

I pushed on, down and back from the infamous Energy Lab, which was not nearly as hard as I thought it would be (luckily because it was not too hot).  On my way down into this section the sun started to set.  I was headed straight into the ocean looking at this amazing sunset.  How much better could it get?  I made it back onto the highway just as it got dark and for this last 10km of the run, I ran with a glow stick around my race belt.  Some people that were headed in the other direction did not have any illumination, and because it was so dark, I almost ran head long into them.

Once back into the lights of the town, and with only 2km left to go the reality of completing this amazing race started to hit me.  I floated in those last kilometers.   I took everything in and appreciated every word any stranger on the street was saying to me.  Sure, people were walking back with their bikes, having finished the race hours ago.  Sure, it was not nearly my fastest IronMan.  Sure, I was not in the top anything in my age group.  But I was sure this was the best race of my life.  I was about to finish something that got started in my head almost 7 years ago.  Something that I had trained for but nearly didn’t get to after having a stress fracture in my foot in March, and having hernia surgery only 6 weeks before the race.  Thanks to Dr. Peter Cook’s advice to get to St. Joseph’s emergency room that Tuesday night, I had the hernia surgery and recovered amazingly quickly.  I had missed some crucial training both in my long distance running in the spring and long bike rides because of the surgery, but with Greg’s coaching and the support of my family and friends I knew I could do this.  And I did.   It is a first time experience equivalent (but not quite equal) to marrying my wonderful husband Mario and giving birth to my four amazing children, Daniel, Olivia, Eric and Jake.

As I approached the finish shoot the happiness just came out.  I danced across the finish line.  I only wish I had stayed and danced longer.  Maybe I’ll get another chance one day.  “Oh no”, Mario says – he was reading over my shoulder 🙂

Am I the Oldest? Mt. Tremblant 70.3, Race Report by IronPapa, Paul Allingham