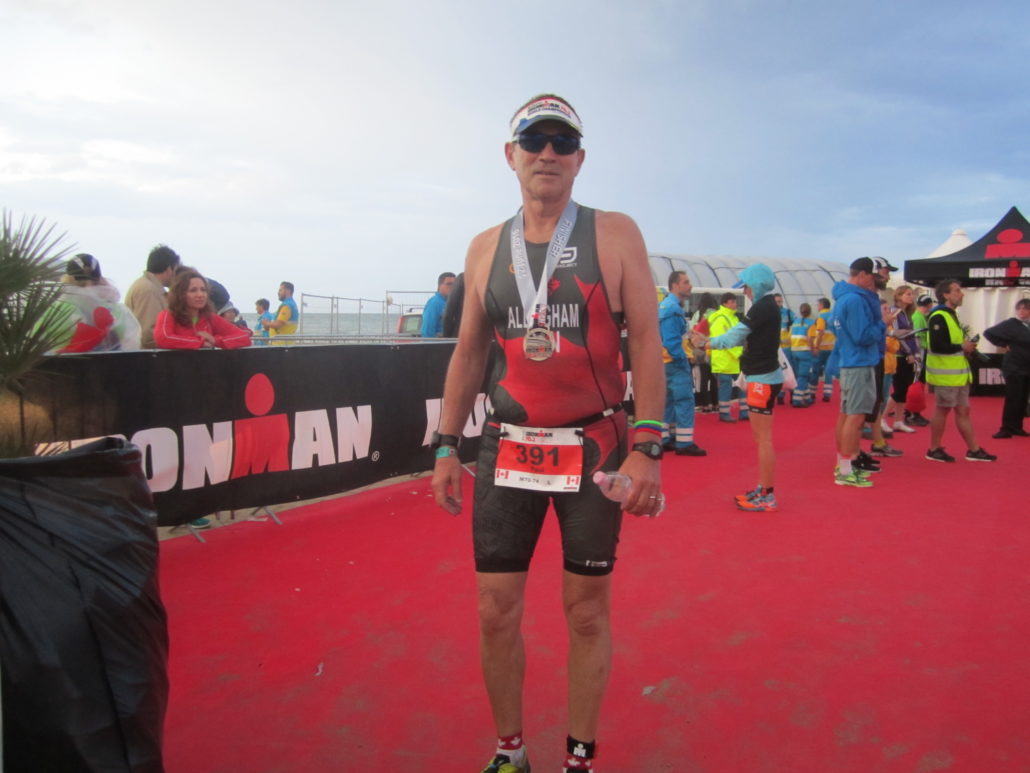 This was quite an experience in both a good and bad way.
Forecast for race day was rain and thunderstorms – didn’t materialize.  But the race start was scheduled for noon with a self seeding walk-in start for the swim.  Just as the pros entered the water followed by about 200 of the 1300 age groupers a gale started to blow which really whipped up the water and blew over the swim finish “arches”.  And one of the early starters did the swim out to the breakwall of rocks that we were to swim through and was swept into the rock getting a head and leg abrasion.  So they stopped the swim with about 1100 of us lined up on the beach and a few in the water, many of whom completed the swim including all the pros.
They decided to give everyone a time of 1 hour for the swim and Transition 1 and restarted the race in a sort of time trial start 5 at a time every 5 seconds from the bike start.   But you could take your time in transition from wet suit to bike gear and get in the line whenever you wanted.  I was OK with this as I’d experienced somewhat the same thing at the Steelhead 70.3 a few years ago.  Que sera sera – Italian???  I’m trying but Joanne speaks fluent Italian and I just smile and eat – and maybe a little vino.
So I headed out on the bike and by then the gale had diminished significantly.  The bike course was harder than I expected with about 45K of hills west of Pescara and what I interpreted from the elevation chart as 5-7% grades with 3 rises of 4-5K turned out to be relatively continuous climbs and descents with some grades reaching 12-14% for parts of the climbs.  But I finished OK despite my limited training and indulging in the Italian and Sicilian food and lifestyle.
It rained lightly for the last 30 minutes of the bike and during most of the run but was not windy and it kept things a bit cooler still mid 20’sC.  My past GI problems started about 14K into the run and I walked most of the last 7K.  As a result while I finished 15 minutes ahead of my chief competitor, a wonderful 74 year old Japanese gentleman who we spent some time with, he started 20 minutes after me on the bike and beat my time by 5 minutes.  That’s probably at least what I lost in the last 7K as we passed each other 5-6 timers on the 3 loop course and I tracked the difference in our time and distance and I was 24 minutes ahead of him at one point – I just didn’t know when he had started.
But I can’t complain about a 2cd place especially when I got to know this guy.  He was a “pro” and said he had completed 29 Ironman races so he deserved it.  But he was the only guy in the race older than me.
We are now spending a few days 100K up the Adriatic Coast at Joanne’s parents birthplace, Porto San Giorgio, and visiting several cousins and their families.  Home Friday and then to Tremblant for the 70.3 on the 26th.
Attached a few photos that are good photos taken by Joanne but do show the GI distress on my face.
Ciao, Paolo

My Cottage Triathlon, By Darin Graham