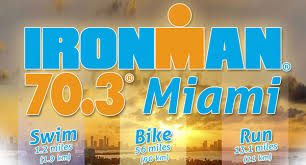 I completed that Miami 70.3, finished 2cd in my age group and took the qualifying spot for the 70.3 World Championship in Australia (Mooloolaba on the Sun Coast) next September 2016.

I have a mixed review of the race.  I did very well in both the swim and bike portions but poorly in the run.
The day started good weather wise, about 80F and overcast and not quite as windy as earlier in the week although still pretty breezy.  But the temperature rose to about 90F with 80% humidity as the sun came out for most of the run.  Water temperature for the swim was 80F and not wet suit legal.  And they started warning of jellyfish at the start and encouraged those who had allergies or were in any way fearful to wear wet suits, start in the last wave, or only do the bike and run portions – of course you would get no official time or qualification if you did any of these.
My swim went well in 38:52 including a 2 minute run to transition before the timing mat. Salt water does help buoyancy and speed and I mastered keeping the salt water out of my mouth while breathing as it made me nauseous.  But I kept feeling “niggled” and tingly on my bare arms and shoulders during the swim.  I thought it was weeds as there were a lot to swim through in parts but later realized that it was also jellyfish tentacles that were stinging me somewhat.  I even bumped into a couple that I could feel.  I didn’t really suffer but did take the volunteers up on the offer of being sprayed with some kind of medication or disinfectant when I got out of the water.
The bike course was pretty flat out and back but the wind was behind us going out and a headwind coming back.  It went along an eastern part of the Everglades west of Miami for a bit but I saw no alligators.  (I did see some yesterday at the Kennedy Space Centre Tour.) Averaged 34kph going out and 26kph or so coming back as I tired somewhat into the wind.  Time was 3 hours 5 min including T-2 and beat my buddy Derek by a minute although he stated 2 minutes ahead of me after the swim.
Then onto the run where the heat and humidity did me in.  I really tired and probably either dehydrated a bit (although I drank 4 1/2 bottles on the bike and at every water stop on the run) or suffered a bit of heat stroke.  I had sunscreen on but still go burned a bit as it wore off. I ran and walked a bit on the first loop and then pretty much walked the 2cd loop.  Slowing quite a bit a the end and I threw up  2 Km from the end and rested a bit on a bench.  My old nemesis.
Derek beat me by and half hour overall but 2cd place for me was OK on the day and since he didn’t take the Australia spot for our age group I got it it.  That will be 2 nice trips next year including the Italy 70.3 in June I registered for earlier.  A great 50th anniversary year for travel with Joanne (and races he says quietly).
Finally the season is over and now just light training for a month or two and then it begins again for next year’s race season.