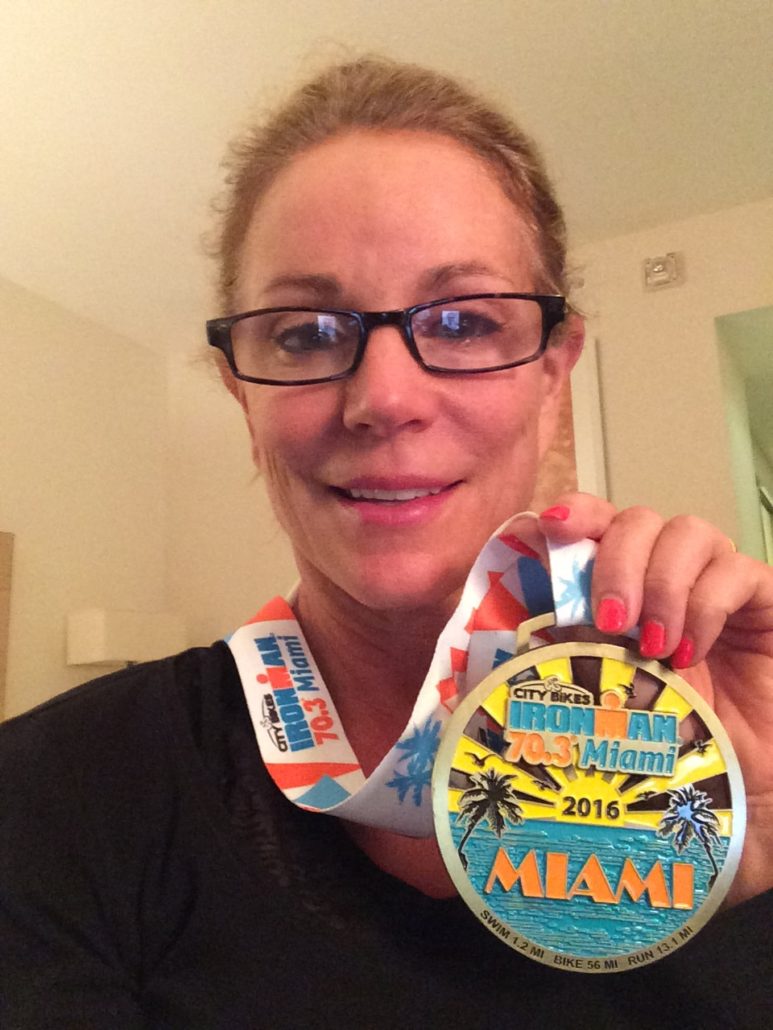 First ,  can’t believe I did it!!  I really had doubts about the run.

Thank you everyone for all the encouragement, support and kind words along the way.

Miami. Always exciting to visit. Biscayne Bay is where the swim took place. Saw some manatee in the bay and was comforted at the thought of swimming along side. Water temp warm.  Will we be allowed wetsuits?  Hmm.

Took a cab to Southbeach. Was going to walk on the beach but my plantar fasciaitis was acting up. Choose to put that out of my mind along with the stomach issues from all the carbs I had consumed. Trial swim for googles in ocean water. No leaks. Hurray!!

Found some great numbing ointment for a persistent sit bone bike seat issue. ( sorry if that’s too much info)

Everything seemed to be falling into place.

Great weather report. What else could go right?

Put all Race gear out. Double checked it all. Decided to give my 2 garmins an extra charge before bed. Set alarm to James Browns song “I Feel Good”, 4:30 AM.  Bed at 9:00. Excited for the morning. ?

Wake up happy and ready. A little worried for my feet. Decided to bring freezer bag filled with ice .

Oatmeal in blender and I’m good to go. Remembering my boys Last words “You got this Mom.”

Make my way to transition area. It was a bit overwhelming.  Everyone looked so strong and serious. Felt like I didn’t belong. Was getting very nervous. When I saw Anna I felt better. She really knew what she was doing.

Go back to my bike for final check before leaving transition. Someone is adjusting their Garmin. Felt sick to my stomach. My Garmins were at the hotel plugged into the wall!!

20 minutes till transition closes. Should I go back?  Too stressful. Decide to just get over it and concentrate on what’s ahead.

They announce no wetsuits.  Ok. Not a problem.

Find Deb, Sam and Anna. Sam is nervous too. I tried to focus on the water. We were following the Pros  (except Sam). Having the girls beside me helped with my nerves.

Swim was wonderful in that the water was warm and route clearly marked. Being with younger 45 and up women was more competitive. Punching,kicking, and shoving the entire swim. These girls were out to win. At one point during the swim I noticed no one was kicking me. It was a nice few minutes until I realized I was off course. All in all was a pleasant swim. On later review I thought my time was a bit slow. Looking at all the times I realized all were slower probably due to the current.

Bike was great. Flat and windy on way out. Not nearly as humid as I expected. Nothing like the Welland Long Tri this past summer.  Everyone was fast. I realized there were many groups  of men that followed our wave.  Decided to relax and not worry about the massive amount of people passing me. I concentrated on counting gels to figure out how much time was passing. One gel took 10 minutes to dissolve. Then counted 500 peddle strokes, followed by two gulps of water. Waited a minute or two then started all over.  Half way through I had finished 7 gells.  That’s how I figured out I must have taken about 1 hour 45 minutes on way out.  About right going against wind. I really had no idea of course how fast or slow I was going but the counting kept me busy. A very pleasant 62 year old German woman passes me. I was thinking I probably was not doing too well considering I only passed about 3 women the entire way. Anna passed me early and Deb a bit later. Sam was a later wave. Overall I could not have gone faster so I decided to be happy with my unknown progress.

Once we reached transition I realized I had a problem. My legs were finished. Barely functioning to walk my bike. I hoped for the best. Finished my water, took another few electrolyte caps and a gel with caffeine hoping to get some sort of energy to finish. Remembered what Margaret said. “Just keep moving forward.”

Walked for a while then ran, if you can call it a run. Hobbled is more like it.  I really missed my garmin now because I knew I could walk fast and was thinking if I was running slow I would rather be walking.

No more pity parties for me. I had to get this done.  I thought of my new outfits just purchased with Miami 70.3 Ironman written across the front. I wanted to wear those clothes proudly !!

I had given myself max 2 hours 30 minutes for this run  but was hoping for 2:15. Decided to let go of that thought. Concentrated on Margaret’s many mantras.

2 very long loops seemed impossible. Everything marked in miles. Could not convert. My brain would not work.  Saw Deb and Anna. They were, I think, almost finished the first loop. Considered briefly hopping over to their side. It would be so easy to cheat in this Race. Decided to make a washroom stop instead. Just wanted to stop. Probably had two more hours to go.  Considered quitting again but wasn’t sure how to get back.

I saw Sam. I was confused and was not sure If she was ahead or behind me. Didn’t matter it was just nice to see her. She looked as hot and tired as I felt but  was still smiling. She just had a baby. She was going to finish.  I had to finish.

First loop done. Lots of walking and two bathroom breaks. First half of last loop was unbearable. Decided to count my steps (think that’s what Greg does) up to 3000 between water stations??  I kept loosing count. Darn brain wasn’t cooperating. Then somehow got some energy. I ran the last 5 K without stopping. I thought I was going fast but actually was my slowest pace. Maybe I am a faster walker??

So happy to be nearly done. I saw Deb and Anna cheering me on.  My eyes welled up and a few tears were shed. Couldn’t believe I had any fluid left in me. The Ironman bridge was up ahead. I passed under in disbelief. Final time about 6:47.

Next, directly to my ice bag, sat and sunk my aching feet into the cold. Bliss.