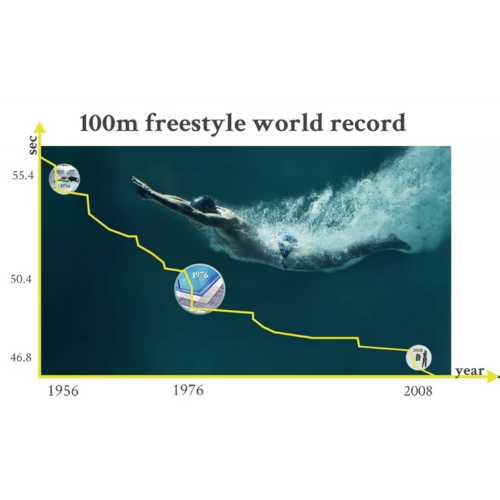 Over time world records in swimming have improved, swimmers are getting faster.  What is their secret?  The answer is likely a combination of many things from improved nutrition, training methods and technology.  A brief look at the 100 m free record tells this story.

Right away one can see that quite a few times swimmers got a lot better all of sudden.  It was 1924 when the 100 m race was first done in a 50 m pool with marked lanes.  FINA states the “Modern Era of Swimming” began in 1957 as conditions were “most” like today.

We will review the 3 biggest changes in the 100 m record since then.

It was just a year earlier at the Melbourne 1956 Olympics that the flip turn was introduced.  Previously swimmers would touch and go with their hands then to their feet pushing off the wall.  This is the first dramatic drop in the record.  Consider now that there is only one turn in the 100 m, it is a lot of improvement.  Now compound the race advantage into a training advantage.  Flip turns would also allow more distance covered in each pool training session.  Every practice just became more effective by doing flip turns.

Further drops in the record can be attributed to technology.  Advances such as electronic timing, standardized diving blocks, changes in lanes ropes and even optimization of pool temperatures.  The largest drop in 1976 is attributed to pool technology.  Gutters became part of pools allowing water to splash over the edge and be collected back into the pool.  Previously waves would hit the edge of the pool and splash back into the pool.  Gutters greatly reduced turbulence from the race letting swimmers swim even better.

The drop of 2008 is a bit of a blip.  As this drop is attributed to a technology allowed and then later banned.  In 2008 full body “shark skin” suits were worn.  Speedo had developed their LZR suits and they were fast.  So fast in fact that 98% of the Olympic field wore Speedo’s suit even those athletes sponsored by competitor brands.  The specialized material is still allowed but now swimmers are limited on thickness and how much of their body can be covered.

As a triathlete what can be learned here?  We don’t do flip turns in races, there are no walls.  We can’t use technology to calm to the lake or ocean of the open water.  We wear wetsuits not shark skin.  However there is a lot to still to take away.

We may race in open water but we certainly train in pools.  These pool sessions can benefit greatly from using flip turns.  They allow triathletes to work through each wall.  Without an efficient turnover at the wall every wall becomes a little break where we recover in a way that is not going to happen in the open water.  Flip turns help our pool sessions better mimic the continuous nature of an open water swim.

The calmer water of well-designed pools provides us an opportunity beyond our control in open water.  Absolutely the triathlete needs to develop an ability to deal with turbulent water.  However swimming is a highly technical sport.  Proper stroke execution is equally as important as building fitness.  A calm pool provides opportunity for drills and technical work so the triathlete can become a more efficient swimmer.

We may not be able to wear shark skin but wetsuits are a close second place.  Triathlon wetsuits help us become better swimmers.  Most notably wetsuits increase our buoyancy and correct our body position.  In a wetsuit an OK swimmer becomes a great swimmer.  Come race day triathletes may be mandated to wear wetsuits, or no wetsuits or optional wetsuits.  Triathlete should know their wetsuit advantage.  If the advantage is big, cold water races may be advantageous.  Optional races might be worth the wetsuit advantage despite the time lost in getting it off in transition.  Triathletes benefit greatly from knowing the impact of a wetsuit on their swim.

Other random fact learned in researching this article –

At one time you did not have to surface for breaststroke and swimmers would complete near all the 200 m underwater with many passing out due to oxygen deprivation.

The butterfly stroke was developed after Japanese swimmers perfected the out of the water recovery technique as part of their breast stroke.  Swimmer still use butterbreast as a drill to improve both butterfly and breaststroke technique.