On August 24th I completed the 32nd Lifetime Chicago Triathlon, competing in the Olympic distance event, this is my 3rd year in a row racing in Chicago in one of the largest triathlons in North America with over 9,000 people competing in this event spread out over the sprint and international distances. Most of my races have some form of humorous anecdotes or weird experience to them and this race was no exception. The events actually began the day before, when the rains drove in, the storm was one of the most ominous storms I have seen, at one point it looked like Sharknado 3 was about to begin! The rain and high winds began and it rained steadily, heavily and biblically for hours, bringing back memories of the Great Flood of Burlington 2014. 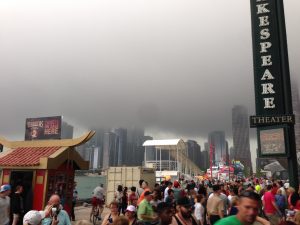 Storm rolling in over Chicago the day before the race.

The morning arrived and I headed down on my bike to transition at 4:00am, transition is located on a grassy knoll in the Monroe Harbor district of Chicago, once getting there and clearing security and bag check I entered the transition area, instead of finding firm footing the grass had given way to pools of mud and water unlike any I have seen before. It was a mess, trying to lay out your gear in an area that had any patch of ground that was not thick deep mud was impossible. Off to the swim start, following the US national anthem the first wave of pro’s was in the water. The swim was going to be a challenge high winds had created choppy conditions, where the swim is located is in the harbor along the shore wall, the choppy conditions were magnified as you were tossed from both sides making the swim tougher than normal. I went into the water in wave 14, the temperature was a balmy 74F decent temperatures to say the least. I was surprised at the number of people I saw hanging onto life boats, kayaks and the shore wall along the 1.5k swim, several times I saw lifeguards jumping off the shore wall to rescue swimmers who were struggling. Upon exiting the swim you have a 500m run to transition on a carpeted pathway, upon entry into T1 the mud was thicker now and footing was precarious at best. I saw several people falling as they raced to get their bikes, running in here I was like a 3 legged cat trying to bury crap on a frozen pond. Once I reached my bike and donned my helmet I grabbed my shoes picked up my bike and carried it to the mount line to avoid running in my cleats and trying to push my bike through the deep ruts in the mud carved from other participants. 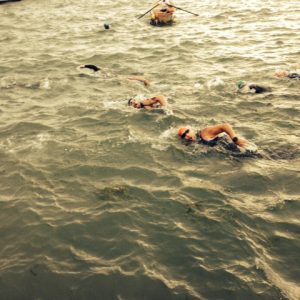 This year is the first year in 18 years they have adjusted the bike course, part of this year’s bike course took place in the tunnel and busway section of downtown Chicago  for approx. 18kms of the race it was very dark, I had clear lenses on which permitted me to see much better than the dark lenses would have, glad I paid attention during the pre-race briefing the day before, there was a horrible crash in one of the tunnels that had paramedics resuscitating one of the riders as I went by. 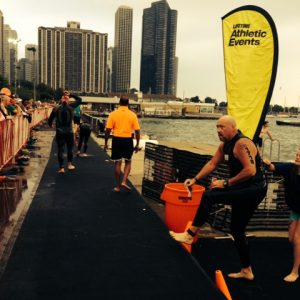 Upon returning to transition it was the same drill take shoes off pick up and carry bike and run in barefoot, exiting I put my running shoes on and tried my best to run out of transition to the run course, but the footing was so poor it made me slower than my normal Flash like pace, hard to believe eh? The run course is flat and winds through the museum district of Chicago, the heat had reached a blistering 105F it had become so hot, insert “how hot was it” here.. the Chicago fire department had set up water cannons along the route to keep runners cool, misting fans were used at some of the aid stations, plus they added several more aid stations this year, to try and keep runners hydrated.

All in all this is a first rate race with over 9,000 people competing in it and thousands of fans lining all aspects of the race course, even some of the people who live under the bridges in some of the areas were watching the bike section of the race which made me reflect for a moment as I watched one shirtless man who had been sleeping on a piece of cardboard stand to watch the riders, how fortunate I am to have what I have and be where I am, it was certainly a contrast when you consider the number of riders going by, all on bikes worth thousands and in some case tens of thousands of dollars with all the Tri-geek paraphernalia on, and this individual had his worldly possessions in a Walgreens plastic bag sleeping in a tunnel on a cardboard box.

All in all a great time and great race extremely well organized the event runs flawlessly given the numbers and logistics of putting this together, if you have an opportunity to put this race on your calendar you will not be disappointed and Chicago is not a bad city to spend some time in as well.

Want to join the discussion?
Feel free to contribute!